How to debug issues in Texture

Sometimes, the environment can get into a state where a fatal interrupt signal occurs inside UIKit. The exception could be from an invalid memory address, unrecognized selector, or a typical out of bounds to name a few. Since Texture is fairly robust, it is the case sometimes that UIKit is more fragile or implicitly expects some behavior by its implementors. It is also likely that crashes will be occurring for a small percentage of your users, visible to you only through a crash reporting service.

Let’s go through an example where @maicki and @nguyenhuy solved a mysterious and non-deterministic crash.

In Crashlytics, there was a new top crasher for a host application built with Texture. A crash was being seen in the collection view during high frequency reloads and view controller dismissals. The crash logs were non-obvious, the crashing call stack went several frames deep into UIKit.

The crash count had risen suddenly in recent versions, so this indicated that a git bisect might reveal some useful information. A commit was found that introduced the following change.

This change ensured that the collection view should clear out its data when the data source was being nilled out. This release would occur in situations like when the collection view is being deallocated. Something very important to note is Texture has the capability to asynchronously deallocate objects by “stealing” the pointer from the reference counter, and using a run loop timer to batch release the pointer triggering the actual work to deallocate via child objects’s dealloc. 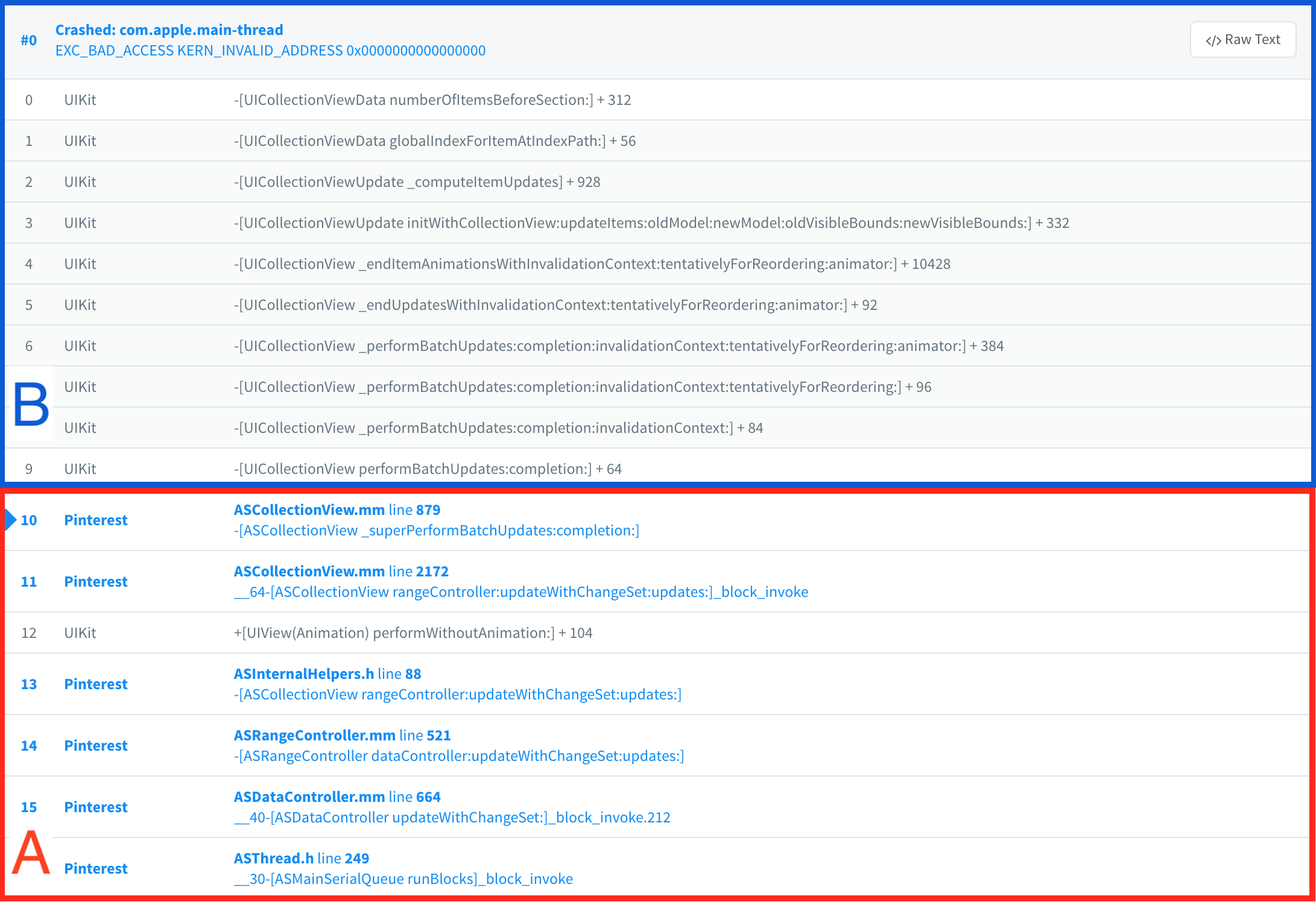 There are a series of block invokes happening here.

These are block invokes happening inside UIKit. In call frame 2 you see that there is a calculation to determine the transformation of items. It is a little odd that UIKit does this work again after Texture already presents a transition map via the data structures provided within the performBatchUpdates flow. Looking at the top two frames in the call stack we see UICollectionViewData, a private UIKit class, is trying to access what appears to be a shared data store and querying it for data.

Hypothesis: the new clearData call is poorly timed, as it is destroying the internal data store of the ASCollectionView while UIKit is executing a series of block invokes for a batch update. This is possible because of the way ASMainSerialQueue can schedule work. Between the time that the collection view schedules a new batch update in the ASMainSerialQueue and when the queue is actually able to consume that block, the async deallocate run loop timer steals the collection view pointer and marks the object as deallocated. Since the collection view pointer is still technically valid in memory but already sent its dealloc, the objc_msgsend goes through to begin performing the batch update flow.

Here is the collection view’s dealloc

The proposed change was then to then prevent destroying the internal data store of the collection view. In order to iterate Texture in a way that is safe for all of its consumers, we should use experiments for sensitive flows of code.

Using if (ASActivateExperimentalFeature(ASExperimentalSkipClearData)) { you can safely gate your new logic to a universal experiment that consumers of Texture can opt into.

@maicki and @nguyenhuy were then able to confirm that preventing the clearData in the data source change prevented this crash from occurring in the wild.

Now this is where things get a little bit fun. Let’s look at another crash with nearly the same call stack. 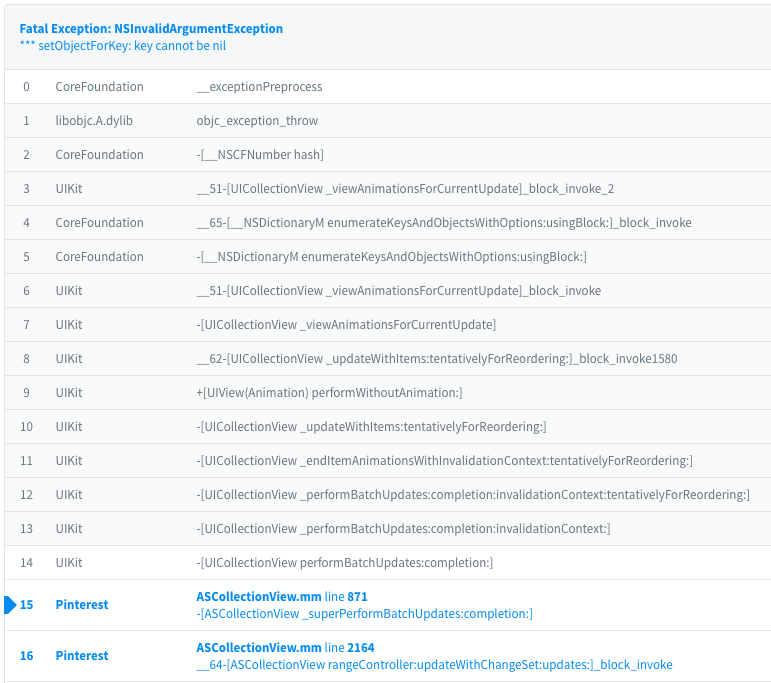 Trying to understand what’s going on in those top UIKit frames would indicate another solution which could hopefully eliminate this family of erroneous states.

Using a disassembler, in this case Hopper, we can look into the UIKit.framework static library and examine the procedures themselves.

As of XCode 10.x, the UIKit.framework file should be here: /Library/Developer/CoreSimulator/Profiles/Runtimes/iOS 9.3.simruntime/Contents/Resources/RuntimeRoot/System/Library/Frameworks/UIKit.framework. You should choose the appropriate runtime.

Select the UIKit binary. It takes sometime to load. Once it is done, we search for _viewAnimationsForCurrentUpdate function. We note that block invoke _51...._block_invoke_2 is the closest to the crash. Once we load _viewAnimationsForCurrentUpdate, we get the assembly, which most people shouldn’t spend the time trying to mentally decompile. Thankfully, Hopper has a mode called “Pseudo Code Mode” as a segment control at the top. Hopper will try to decompile as best as it can.

Looking at the first _block_invoke by the _viewAnimationsForCurrentUpdate, we see the following pseudo code

Demystifying this, we see that var_610 is a placeholder for the allocation of the block. self is captured into the block:

Understanding how to work backwards to know the types of these placeholder variables are important as the block parameters as interpreted by Hopper are int for their reference address size.

As a quick note, this is from the LLVM ABI spec for Objective C blocks on the stack:

You can see how these map roughly to what we see in the decompiled pseudo code. Every block invocation will receive the arg0 parameter as a reference to the block itself. This way you can access its captured variables.

Ok so what are the arguments going into the ___51-[UICollectionView _viewAnimationsForCurrentUpdate]_block_invoke_2 ?

First we have to think about variables this new block is capturing. These are indicated by the trailing assignments in the stack chunk for the block definition.

Ok so bringing us back to the problem at hand, we notice that there is a shared, temporally sensitive data structure _visibleCellsDict which is private to UIKit that is used for calculations. This reference is passed through multiple blocks.

Going into the last part of this adventure, we arrive to the __51-[UICollectionView _viewAnimationsForCurrentUpdate]_block_invoke_2. Here we can see mentions of setting values in a NSDictionary. Looking at our crash signature, the throwing function is setObject:forKey which we see in

Working the placeholder variables back into the into their real types, we see the execution path:

Looking back at our crash log, we see that the fatal is thrown on a [NSCFNumber hash] sent to a null pointer. Prior knowledge indicates that this hashing function is used when indexing objects as keys in a set or dictionary. According to this pathway, the later 0x0 comparison to the pointer should assert that it would not crash the setObject:forKeyedSubscript.

This is very unsettling. It should be impossible for a 0x0 address to be sent the hashing invocation, unless the procedure was not branching to this safer part of the block invoke, and instead was executing through to the other branches in this procedure. However, this is impossible due to the *(edi + 0x1c) as statically defined earlier.

Weaver is a remote debugging tool for Texture apps. It is a client library and gateway server combination that uses Chrome DevTools on your browser to debug your application’s layout hierarchy.

Weaver is a hard fork of PonyDebugger. It was trimmed down and modified to work with layout elements from both UIKit and Texture.

To use Weaver, you must enable the client in your iOS application and connect it to the gateway server called “ponyd”.